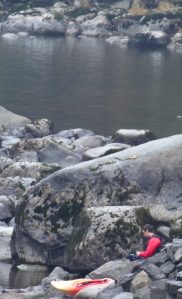 I write flash fiction, non-fiction, essays and novels. This month’s Tease is from a short story involving whitewater and passion.

He sprays the cleaner on the channels between the runners, digs out the grime with the screwdriver, shaving little black curls of gunk off the metal, sprays and digs some more, wipes it down and then sprays the silicone. It dries and he pulls the slider back and forth. “I give it an A plus. Smooth. Smooth as that eddy below Whitebird.”

He thinks back farther, to another time. One of the best. It was the second summer after he dropped out of college. He was working for a rafting company out of Riggins where the Little Salmon gives itself to the Lower Salmon. He had parlayed a few whitewater classes at EWU into a summer job and caught the fever. With just twenty credits remaining for his business degree, he never returned. Instead, he matriculated in the unforgiving rapids of the Snake, Deschutes, Lochsa and Salmon. He hoped to open his own outfit once he gleaned enough experience, an argument that never eased the furrows in his father’s corporate banker forehead.

So he was on his own and never felt freer. He didn’t have to justify his actions to anyone. In his mind, it had been a clear choice. He gave up his future in the political, hoop-jumping world of business administration for a level, albeit frothing, playing field. The river didn’t care where you went to school, who your parents were. If you could perform, you were a guide; if you didn’t, you dug shit holes and humped gear until you learned enough to try again. Ironically, this appreciation of fairness was something he learned from his father, implored repeatedly, on the dusty baseball diamonds of Kennewick, or under the truck in the garage or fishing the sparkling waters of the Hanford Reach.

And so he spent his summers learning, guiding and learning ever more. Then she arrived, stepping off the Rathdrum Fields Christian Assembly bus dressed in Tevas, a modest swimsuit and convex, chromotose lenses that reflected every terraced outcrop in the corrugated canyon walls. He tried for three days to get her attention, over meals, stowing gear, even wandering near one of the fellowship’s sunset prayer gatherings. On the final day, all hope sunk when he was assigned to the Mess raft, a fourteen-foot leviathan brimful with gear. Dutch ovens, tents, tarps, ammo boxes, aluminum trunks and dry bags filled the spaces between the thwarts. The guide’s perch was a bench made of stacked coolers, the unusual height required special oars. It was a slow, boring ride, deliberate and safe, down the most prudent passages in the river. Clients never rode on the Mess. No one ever asked, until her.

By Sarah
Diary Of The Wests